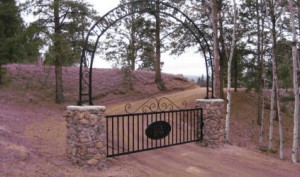 The small mountain community of Florissant, 35 miles west of Colorado Springs, is celebrating its 135-year-old cemetery with the publication of a new book, Florissant, Colorado Pioneer Cemetery–The Stories Behind the Tombstones, and the dedication of a new cemetery entrance on Monday, May 25.

Florissant was established in June, 1870, when Judge James Castello built a Trading Post adjacent to a Ute Indian fort. In 1872, Judge Castello applied for an official post office which he named “Florissant” for his hometown in Missouri. Gold seekers and pioneers flooded into the area, but were unable to file legal title to homesteads until a survey of the Pikes Peak region was published in 1876. Later, when the Colorado Midland Railroad arrived 1886, scores of new families moved into the area. These early pioneers lost loved ones in the ebb and flow of life, and an informal cemetery sprang up among the aspens and pines. Many of the graves were marked by a simple wooden stake. The earliest burial was probably that of a child who died in 1874, but the cemetery is filled with dozens of un-marked graves (with unknown dates) as the wooden markers deteriorated and disappeared. There may very well be earlier burials.

Authors Laura L. Moncrief and Nancy M. Boyd open the graves of 109 of these early pioneers buried in the cemetery in their comprehensive new book, Florissant, Colorado Pioneer Cemetery–The Stories Behind the Tombstones. This book is 220 pages, and includes family genealogies, photos of each pioneer tombstone, and a complete index of over 500 surnames

If you need immediate assistance, or would like to arrange a visit another day or time