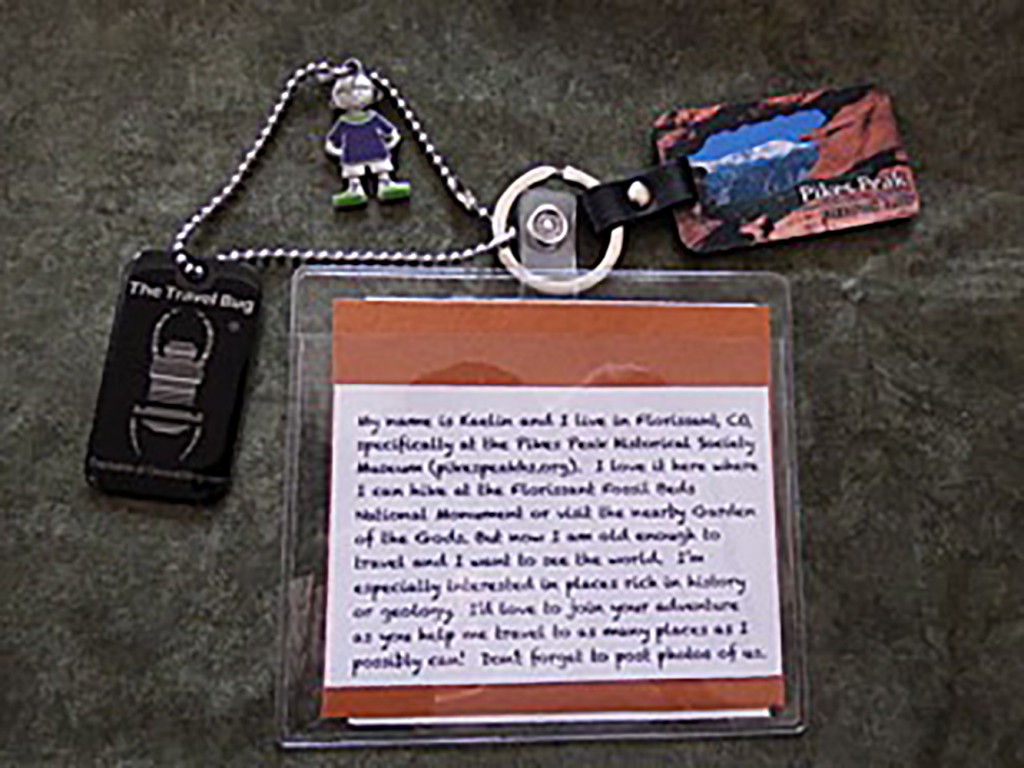 Kaelin is a hitchhiker attached to the PPHS Travel Bug that was released in April 2018.

What is a Travel Bug?    A geocaching travel bug has a unique tracking number which allows its movements to be tracked online (www.geocaching.com).  Objects attached to the trackable dog tag are called hitchhikers and are often assigned a mission.  One of the hitchhikers on our travel bug is a little boy charm which we named Kaelin.  His mission will be to visit places rich in history and geology around the world and have photos taken of his travels.  We will post updates in the newsletter and on the website.  It should be a fun way to see where it travels.

Our seven history-related geocaches were placed in 2015 and 2016.  As of April 1, 2018, they have been found over 700 times by geocachers around the world, which has been our unique way of sharing this part of our world.
Geocacher, Hives from Little Canada, Minnesota who has found 23,426 caches so far,  picked up Kaelin the day he was launched, April 16,2018 and started him on his journey as he was making his way back home.  As of May 21, Kaelin has traveled 1,682.8 miles through Oklahoma, Arkansas, Missouri, Iowa and Minnesota.  He has visited 20 caches along the way with Hives, including 6 cemeteries.  He spent Cinco De Mayo in Minnesota and visited Lt. Charles Garrison in Missouri.  He visited two historic sights where he learned about a cool courthouse in Oklahoma where he read the following:
“When the Cherokees arrived in Indian Territory, they divided their new lands into nine districts based on the 1839 Constitution of the Cherokee Nation. The Saline Courthouse, located in Rose, Oklahoma, is the only one of the nine courthouses to remain standing today.”
and in Missouri he got to see –
A chimney made of native fieldstone from the Henry W. Younger farm with hand-cut stones providing an authentic setting for three interpretive panels telling the story of The Burnt District.

The Pikes Peak Historical Museum has no regular open hours in the Winter Season from November to March.

The museum opening will be delayed due to the Covid-19 epidemic. Opening will take place when public safety allows.